Blowing It All Up at the End, Trump-style 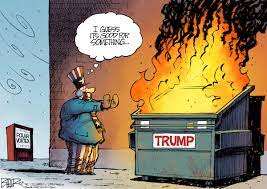 It's mind-boggling how self-contradictory Republicans can be about government spending. They claim to be for fiscal responsibility. Yet they can run up a deficit as fast as the "tax & spend" strawman they trot out when they oppose a Democratic policy. But the unfolding coronavirus relief bill debacle is one step beyond.

In Congress, the GOP is for fiscal restraint only when it doesn't hold the Presidency. In the 1990s, House Speaker Newt Gingrich opposed President Bill Clinton on spending to the point of a budget surplus. Which one of them deserves the credit is still a point of controversy. More recently, Republicans claimed fiscal responsibility prompted their opposition to President Obama's priorities.
With Trump in the White House, budget deficits have soared, despite Democratic opposition. The GOP's tax cut during the recent expansion is a particularly egregious example. It was not only a naked attempt to bolster Trump's reelection chances. It also ran counter to prevailing economic wisdom. In economic good times, the government should pay off debt from deficit spending in bad times. To do so, it cuts expenditures, raises taxes, or both.
Instead, the Republicans cut revenues by cutting taxes without enough offsets in expenditures. The Tax Policy Center estimates that the Tax Cuts and Jobs Act of 2017 will raise budget deficits from $1 trillion to $2 trillion over the ten years from 2018 through 2027. GOP lawmakers hoped the resulting private-sector stimulus would increase economic activity. The current recession, provoked by pandemic-related limitations on the economy, destroyed this hope.
Things got worse when it became clear that fiscal stimulus would be necessary. Monetary stimulus from the Fed helped to stabilize financial markets and large corporations. Helping small businesses, essential workers, and the unemployed meant further deficit spending. Conscious of an upcoming national election, Republicans got on board with the first round of stimulus.
But then the GOP lost the White House. Thereafter they balked at considering another round despite the rising economic and human toll of the pandemic. Republicans wasted more than a month in a pointless preoccupation with conspiracy theories about election fraud. A lack of evidence and repeated defeats in the courtroom, including the Supreme Court, did not dissuade some of them, such as Senator Rand Paul of Kentucky. Paul continued to rant about stolen elections as he voted against the $900 billion COVID relief bill that went to the President's desk on Monday.
In a further turn of the screw, Trump raised objections to the bill yesterday. But he did not take part in the tortuous negotiations over its contents. Yet this fact did not stop him from demanding increased direct payments to taxpayers and other unspecified revisions. House Speaker Nancy Pelosi immediately took him up on the matter, as Trump's recommended $2000 per American had been her number as well. The Congressional GOP wanted less and got it.
This sort of incompetent governance has led to exploding budget deficits with a lot less bang for the borrowed buck. And now Trump threatens to blow it all up at the end of his sordid, one-term Presidency.
at December 23, 2020