THE GOP'S THEATER OF SEDITION: A THREAT TO AMERICAN DEMOCRACY

When Donald Trump lost the popular vote in 2016, Hillary Clinton did not refuse to concede the election to him. Thereafter, the GSA did not slow-walk granting access to and funding for Trump's transition team. President Obama's political appointees did not restrict access to the Executive Branch functions that are key to maintaining national security. Instead, Obama made certain that Trump and his team received detailed briefings on all key aspects of the presidency. Moreover, Democrats did not challenge the 2016 presidential election results in every court venue that would accept a filing. They did not hold seditious rallies and protests featuring weapon-toting domestic terrorists. And they did not attempt to rewrite federal law on the fly to suit their momentary needs.

Yet Trump and his Republican allies have done and are doing all of these things. It remains uncertain just how far they are willing to push this political theater of sedition. It is no longer far-fetched to consider the possibility of armed insurrection and attempted coup d'etat. "Coup" is the correct term, as Biden was the clear winner of the November presidential election. On a nationwide basis, he received over seven million votes more than Trump. In the Electoral College, he received 306 votes to Trump's 232. Some Republicans have contested Biden's victory in certain states that Trump carried in 2016. However, Biden's margin of victory in these states in 2020 was larger than Trump's in 2016. According to Todd J. Gillman of the Dallas Morning News,

Biden’s combined victory margin in those states was 267,204 votes, according to tallies certified by each state ahead of the Dec. 14 Electoral College voting. By comparison, Trump’s presidency hinged on just 79,646 combined votes in three 2016 battlegrounds: Michigan, Pennsylvania and Wisconsin. Biden’s margin this time around in Pennsylvania (80,555) was nearly double Trump’s four years earlier (46,765). In Michigan, Biden’s 154,188-vote cushion was nearly 15 times the size of Trump’s (10,704).

All fifty states certified their election results. The Electoral College then elected Biden by a margin of 74 votes. But certain House of Representatives and Senate members intend to challenge these results in a constitutionally-mandated joint session of Congress on January 6. They will do so despite sixty lawsuits' failure to achieve the same purpose -- including two appeals to the U.S. Supreme Court. In addition to several Republican members of the House of Representatives (including the infamous Louie Gohmert of Texas, who has been fomenting violent insurrection in response to the failure of his recent lawsuit against Vice President Pence), at least twelve Senators plan to raise objections to Biden's victory in the aforementioned swing states.

The first Senator to declare this intention was Josh Hawley of Missouri, but he was soon outdone by an outlandish but sinister plot hatched by Ted Cruz of Texas. In cahoots with ten other current and incoming Senators, Cruz announced a plan to demand a ten-day Congressional certification process delay. An "emergency audit" of election results in the battleground states would be done. The results of this audit would be available to the legislatures of the states in question, which presumably would use them to subvert the popular vote and appoint electors for Trump to replace those who represented Biden.

What happened to states' rights, which the GOP historically has favored over a strong federal government? There is no basis in the U.S. Constitution for Congress to delay performing its duty to review and certify the fifty states' election results. It is more of a formality than an opportunity to revise election results after the fact. Moreover, there is a consensus that these GOP Senators and Representatives' efforts are doomed to failure. So why make them at all? One obvious reason is positioning for the 2024 Republican presidential primaries. Cruz has already tried his luck as a presidential candidate, only to be beaten by Trump, so it's not surprising that he would revive this ambition now.

However, how GOP presidential hopefuls are placing their markers is unusual and dangerous. Yale professor Timothy Snyder sees them setting a "precedent for 2024: lose, lie, get appointed by Congress." Science writer Todd Johnston sees this behavior as the product of a larger "recipe" for GOP gaslighting. He stresses not losing sight of the fact that Trump and his Republican supporters (such as the recently-pardoned Roger Stone, who invented the "Stop the Steal" canard) manufactured the allegations of electoral fraud in the first place. "Then they spread them via a propaganda machine, staged publicity stunts to lend them the air of credibility, and now cite their own disinformation as a call to action."

This strategy's most offensive aspect is not its deliberate deception based on lies, but its hypocrisy. The Republicans themselves practice election fraud. Today, the Washington Post broke the story that President Trump clearly and directly asked Georgia Secretary of State Brad Raffensperger, a Republican, to falsify the Georgia election results to overturn Biden's victory in the state. The Dallas Morning News notes that this request (which Raffensperger refused to grant) is only "the latest step in an unprecedented effort by a sitting president to pressure a state official to reverse the outcome of a free and fair election that he lost."

The sum of all of this lying and cheating is not merely the attempted stealing of an election by the most unscrupulous President ever to hold the office. It is the crossing of a boundary. Heretofore, violating the integrity of the United States' democratic electoral process was taboo. Absent decisive action within the American legal system's bounds, as delimited by the Constitution, any politician who loses an election will have recourse to the Trump playbook for subverting the electorate's will. Such action will need to be severe enough in its punitive nature to act as a deterrent in the future, but not so draconian that it reinforces the grievance-collecting right-wing fanatics who support Trump and his gangster politics.

Otherwise, the American experiment in democracy is dead. The United States will become just another "shithole country" where "might makes right" and political offices go to the most corrupt candidates. 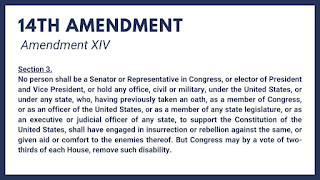 Email ThisBlogThis!Share to TwitterShare to FacebookShare to Pinterest
Labels: politics, US