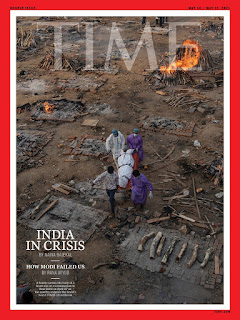 It seems that many in the United States have assumed that the COVID pandemic is not a concern anymore. The news coming out of India since a week ago should correct that mistaken notion. It should also serve to change the social behavior of Americans.

The Trump-like populist Modi has been outdone in public health incompetence only by Brazil's Bolsonaro. In January, India dropped its collective guard. Indians neglected social precautions against viral transmission. The virus continued to spread. Viral variants more infectious and deadly than the original novel coronavirus emerged. At the same time, the Modi government lost its focus on vaccination. This happened despite banning the export of vaccine doses earmarked for COVAX and other buyers.

As a result, the Indian healthcare system has broken down under the weight of a sudden, geometric increase in seriously ill COVID patients. Hospitals have run out of basic supplies like oxygen. Some private facilities have demanded patients' families supply their own on penalty of discharge.

If Trump had won reelection to the presidency (which he did not, despite his and many Republican officeholders' attempts to perpetuate the Big Lie), Americans would have done the same. What has happened in India would have happened in the United States.

And it could still happen here. The United States has not yet achieved "herd immunity," a term politicians and journalists use more than they understand. It's fantastic that the American economy seems to be doing well. Still, we would do well to keep up our public health guard while still promoting economic recovery.

Are We Done with the Mask?

Surgical and N95 Face Masks As of May 13, the CDC has freed vaccinated Americans from the mask (with some limitations). This announcement ma...